According to the scheduling methodology being described in chapter The Automatic Scheduling Mode , the two key parameters for changing the plan in the automatic mode are priority and capacity.

Priority: Crucial role for the schedule

Jobs that will be finished past their due date are indicated by a red rectangle, the white number showing the delay in the time unit specified in the "Settings" dialog, a red due date symbol and red task bars (of those tasks that finish past the job's due date).

Change priority by changing the sequence number in the Job View

next to the job name in the table area or select “Set Sequence Number” from the job’s context menu (right-click on the job or one of its tasks in the diagram area): 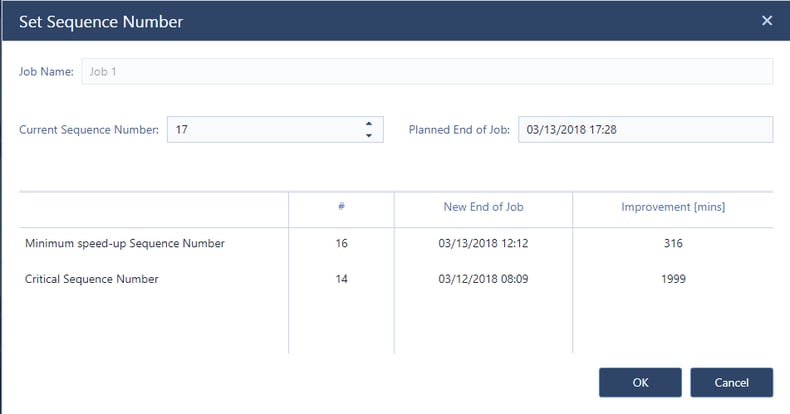 The options of the Set Sequence Number dialog

Change priority by changing the sequence number in the Resource View

Working in the Resource View, you look at the resources and the queue of tasks that is assigned to this specific resource.

The questions arising in the Resource View could be something like:

This dialog is similar to the one of the Job View, giving, however more task related information in the upper part. As you are in the Resource View and as you are changing the queue of tasks for one resource, the lower part helps you answer the above mentioned questions:

Tip: Since changing the priority will directly affect the operations of lower priority you can click

in the "Essentials" tab of the menu ribbon to highlight the tasks affected by plan modifications in order to understand which orders had been pushed out to have the other job finished earlier.

Here are some further resources that might be helpful:

Ebook "7 steps to make your trial a success"

Use just plan it